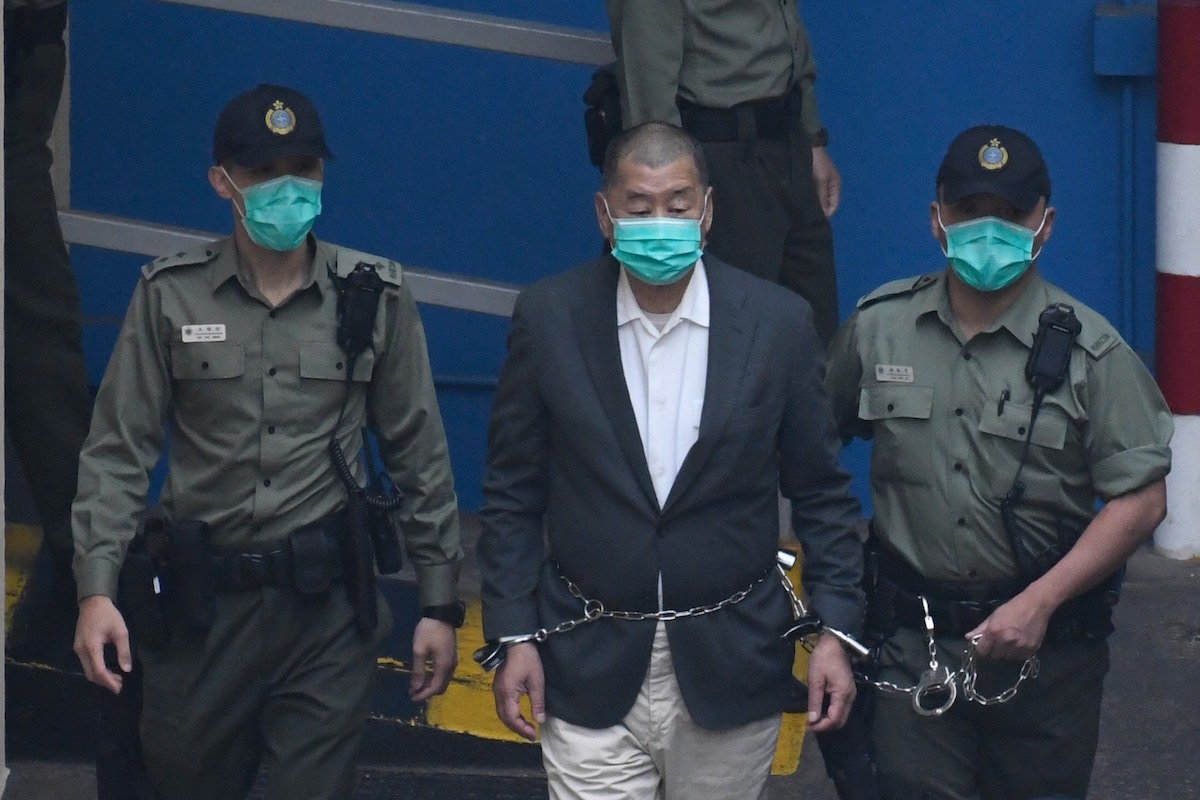 Prominent Hong Kong media mogul and pro-democracy advocate Jimmy Lai, along with six of his former staff members, were charged by prosecutors with an additional National Security Law (NSL) violation, this time regarding “seditious publications,” as part of their ongoing trial.
Seventy-four-year-old Lai has already been convicted under the city’s wide-sweeping NSL, including most recently on the charge of unauthorized assembly in a vigil commemorating the Tiananmen Square Massacre and on collusion charges, handing him a total of 13 months in prison.
Lai is the outspoken founder of Hong Kong’s now-shuttered anti-Beijing newspaper Apple Daily, as well as its parent company, Next Digital.

Lai and the group of former Apple Daily staffers appeared in front of Chief Magistrate Peter Law in a Hong Kong court on Dec. 28, where the prosecution imposed the additional charge.
Under the sedition charge, Lai is accused of conspiracy to print, publish, sell, and distribute “seditious publications” between April 2019 and the company’s last day in business, June 24, 2021.
Prosecutors argued that Apple Daily publications could “bring into hatred or contempt” the Chinese and Hong Kong governments. Prosecutors also suggested the publications could raise “discontent amongst inhabitants of Hong Kong,” incite violence, or “counsel disobedience to law or to any lawful order,” according to the South China Morning Post.
The Beijing-style NSL, which bans what the Hong Kong government deems as secession, subversion, or terrorism, has cracked down on citizens’ rights of speech and access to press. More than 150 citizens have been arrested on grounds of NSL violations. Furthermore, any display of dissent, from publishing popular anti-China news articles to waving a flag at a pro-democracy protest, results in an NSL charge and a hefty prison sentence.
Hong Kong and Chinese elites claim that no rights have been restricted under the NSL and that the law has restored stability in the city since the 2019 pro-democracy protests, according to Reuters.
The six other Apple Daily employees—former chief editor Ryan Law; former deputy chief editor Chan Pui-man; former Next Digital CEO Cheung Kim-hung; former columnist Yeung Ching-kee; former English editor Fung Wai-kong; and former senior editor Lam Man-chung—were also charged with printing and selling seditious publications, as well as “conspiracy to commit collusion with a foreign country or external elements.”
The case against Lai has been adjourned until Feb. 24, until which time all defendants are to be remanded into custody, as none of the defendants issued a bail request. The court is expected to deal with the prosecutor’s application for the case to be moved to the high court, where the maximum penalty is life imprisonment.
Lai is currently serving his sentences for collusion and unauthorized assembly at Hong Kong’s 82-year-old maximum security prison, Stanley Prison, in solitary confinement.
The NSL, imposed in June 2020, aims to censor any critique of the Chinese or Hong Kong governments, by way of the law’s vague language and broad application. Apple Daily and Next Digital, as well as Lai himself, have been prime targets of the NSL for their unabashed criticisms of the Chinese state and its reach into Hong Kong society.
Apple Daily succumbed to the NSL when Hong Kong police raided its headquarters, froze its assets, and seized documents, forcing the newspaper to shut down operations.
This is the latest event in Lai’s continuous struggle against authoritarian control of Hong Kong. Throughout his life, Lai has repeatedly faced censorship of his company, court dates, and prison sentences, but has never cowered, braving the consequences and sacrificing his own freedom for the sake of democratic ideals and human rights for all. The Acton Institute has produced an in-depth documentary on the courageous life of Lai and his ongoing fight against tyranny, The Hong Konger, set to be released in early 2022.