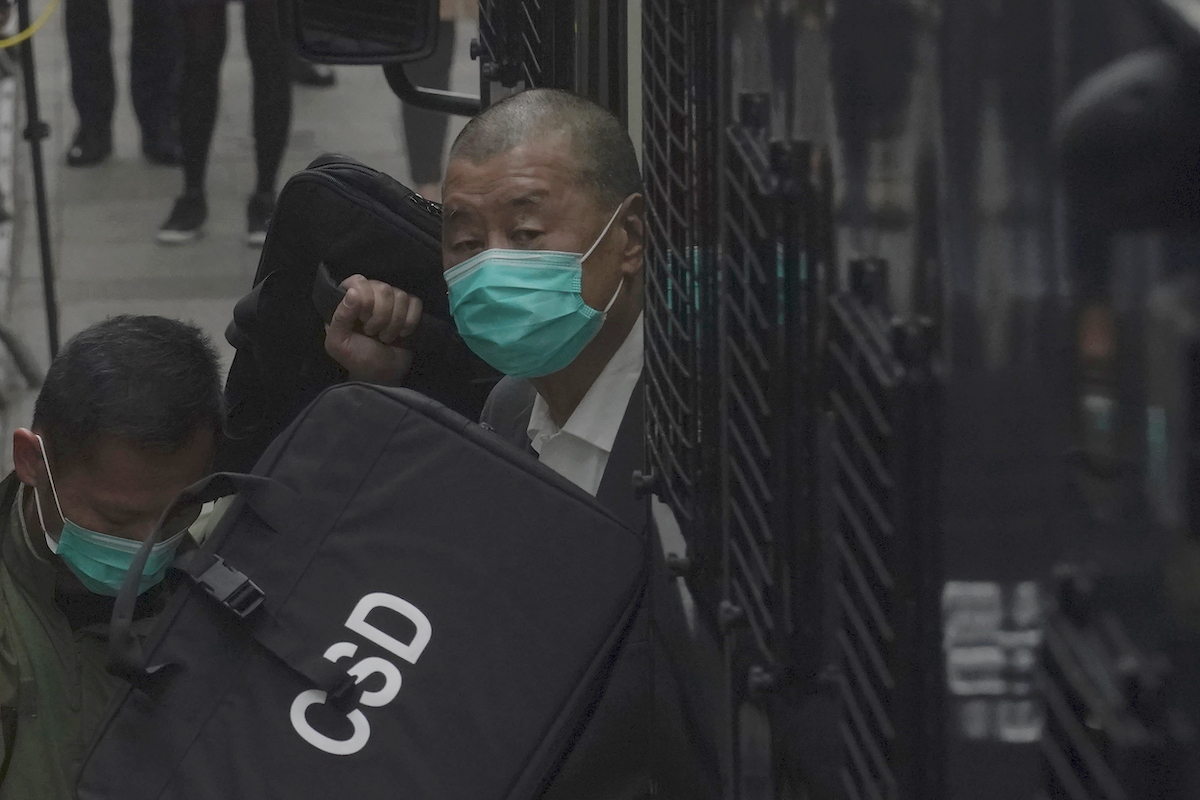 Hong Kong media tycoon and outspoken pro-democracy activist Jimmy Lai has been convicted for his involvement in a vigil commemorating the Tiananmen Square Massacre.
On Dec. 9, Lai, along with two other prominent Hong Kong activists, Gwyneth Ho and Chow Hang Tung, were found guilty of incitement and taking part in unlawful assembly.
According to the BBC, “more than two dozen politicians and activists have been charged” with unlawful assembly since the passing of Hong Kong’s wide-sweeping National Security Law (NSL) in June 2020, which muzzles and punishes any political opposition.

Lai, Ho, and Chow were the last to receive their verdicts, as they contested the charges. During the trial, the defense argued that the trio lit candles in a personal capacity at the vigil and had not incited others to participate.
The presiding judge, Amanda Woodcock, laid aside the defense as “frankly nonsensical,” while calling their participation “an act of protest against the police.”
The three convicted activists are set to receive their sentencing on Dec. 13, when they could be handed up to five years in prison.
Ho, a former Hong Kong reporter, now acts as a social activist in opposition to the city’s current totalitarian climate. Chow is a former lawyer and vice-chair of the now-disbanded Hong Kong Alliance of Democratic Movements in China—the group that organized the annual Tiananmen Square Massacre vigil.
Both Ho’s and Chang’s past career experiences, paired with their influential standing as passionate activists in opposition to the sitting Hong Kong government, makes them prime targets for silencing.
The Tiananmen Square vigil was an annual event held every June 4, marking the horrific 1989 Tiananmen Square Massacre, where Chinese troops opened fire at unarmed student pro-democracy protesters, resulting in an estimated 1,000 people killed.
The 2020 vigil was banned for the first time in 30 years, with public officials citing COVID-19 regulations. Many activists ignored the ban, and tens of thousands participated anyway.
Before this year’s vigil, leaders continued to push COVID-19 restrictions, and a massive police force was sent to barricade main roads leading to Victoria Park, resulting in a dampened commemoration of the massacre.
Outside of banning the large crowds and roaring noise from protesters, the Hong Kong government has consistently attempted to erase even silent memorials of the massacre, like the sculpture The Pillar of Shame, which, in October, was removed from campus grounds by order of Hong Kong University.
Aiming to execute social uniformity through intimidation, the university urged the immediate removal of the statue or else it would be “deemed abandoned.”
Thursday’s ruling is a warning sign to Hong Kong citizens that their city, once a safe-haven for democratic ideals and a gold mine for economic opportunity, may be morphing into a reflection of Chinese society, where totalitarianism is the norm and human rights cease to exist.
Amnesty International, a nongovernmental organization focused on “human rights for all people,” said in a statement conveyed by ABC News: “The Hong Kong government has once again flouted international law by convicting activists simply for their involvement in a peaceful, socially distanced vigil for those killed by Chinese troops on 4 June 1989. The authorities have deemed the vigil ‘unlawful’ because the police did not approve it, but peaceful assembly does not need government approval. These convictions merely underline the pattern of the Hong Kong authorities’ extreme efforts to exploit the law to press multiple trumped-up charges against prominent activists.”
In October, Amnesty International withdrew operations from its base in Hong Kong, saying it could “no longer work freely without fear.”
Lai, who turned 74 last week, is a longtime friend of the Acton Institute. He was the recipient of Acton’s “Faith and Freedom” award in 2020 for his visible commitment to liberty and his safeguarding of moral and Christian convictions.
Lai was founder of the largest pro-democracy newspaper, Apple Daily, as well as its parent company, Next Digital. The 26-year-old business was a prominent voice critiquing the Beijing government and thus was forced to close this past June after Hong Kong police raided its headquarters, seizing its documents and freezing its assets.
First arrested on Aug. 10, 2o20, and currently serving out prison sentences for other NSL-related charges, Lai has never lost hope in democracy and the good it promotes in any society, even though doing so could result in life in prison. From his jail cell, Lai has sent letters to past co-workers, encouraging them to “stand tall” and to “seek justice as journalists.”
The Hong Konger, the Acton Institute’s groundbreaking documentary, is set to be released in early 2022 and focuses on the life of Lai—a successful entrepreneur, outspoken journalist, and Catholic dissident—as well as his courageous efforts against Chinese influence in Hong Kong society.