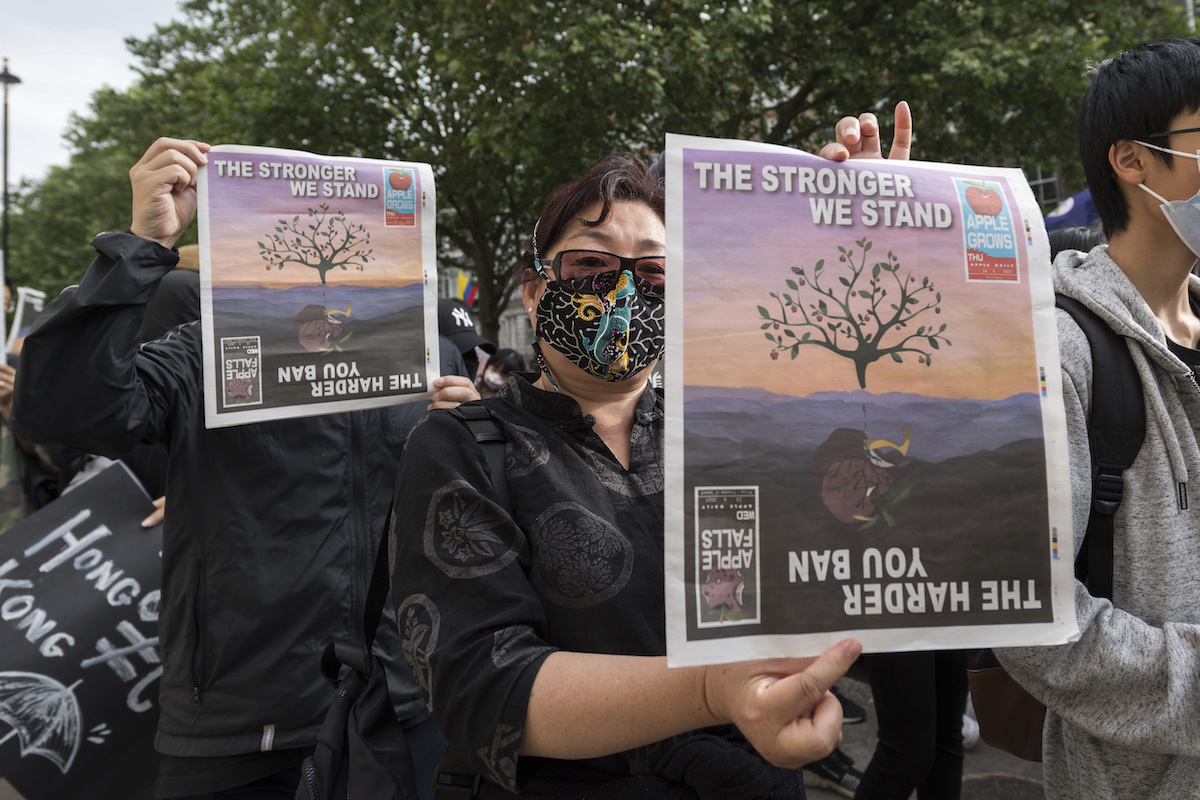 On Sept. 5, Next Digital, parent media company of the now-liquidated pro-democracy Hong Kong newspaper Apple Daily, announced it will begin taking steps to shut down amid pressure from the city’s National Security Law, or NSL.
The NSL bans acts and speech the Chinese communist government consider threatening to national security, including secession, subversion and terrorism.
The remaining four directors of the 26-year old company will step down to best “protect shareholders, creditors, and former employees,” they said in a statement. The former directors are Chairman Ip Yut Kin, Louis Gordon Crovitz, Mark Lambert Clifford and Lam Chung-Yan.
The Hong Kong Journalists Association distributed cash vouchers to former Next Digital employees, but when the Hong Kong government blocked employees’ access to their financial assets, the company was unable to pay outstanding wages to about 700 of its employees. The liquidation of Next Digital will allow payments to its staff members.
The Chinese Communist Government, or CCP, has repeatedly painted Next Digital as a threat to Chinese national security, publicly condemning its publications and investigating its headquarters. According to the former directors of Next Digital, the “Hong Kong government has never indicated which articles published by Apple Daily violated the National Security Law.”
But that did not stop the Hong Kong government from continuing their crackdown on Next Digital. The company gained popularity until its shares were suspended from trading by the CCP in June 2021. This was also the month Hong Kong authorities raided Apple Daily’s headquarters and arrested Apple Daily executives on suspicion of colluding with foreign forces. Hong Kong authorities froze Apple Daily’s assets and seized the employee’s bank accounts, resulting in the shutdown of Apple Daily and the publishing of their final edition.
Apple Daily, which published articles vehemently against Chinese communism, also peaked in popularity its final week, selling 1 million copies of its last edition.
Next Digital published the leading pro-democracy voice in Hong Kong. Its founder, longtime Acton friend Jimmy Lai, was a bold contributor to the fight for democracy and freedom.
Lai believes the NSL is an obvious example of the CCP’s disrespect for the rule of law. In an interview with the Hoover Institute, he said: “… this National Security Law will supersede the rule of law” and that it is “the death knell of Hong Kong.”
Lai is the recipient of Acton Institute’s 2020 Faith and Freedom Award. He is also currently serving a 14-month prison sentence in Hong Kong f0r allegedly colluding with foreign forces by funding a campaign that placed ads in American publications such as The New York Times, calling for U.S. sanctions against Hong Kong. On top of that, he is charged with violating the NSL for taking part in an unauthorized assembly during mass pro-democracy protests in 2019.
The 2019 protests prompted the Hong Kong government to impose the NSL in June 2020, on the eve of “Establishment Day,” the commemoration of the transfer of Hong Kong’s sovereignty from Great Britain to the People’s Republic of China. Since that day, activists, children’s book authors, and individual citizens have been the target of the harsh restrictions that seek to eliminate any public dissent, including the denial of basic human rights.
Hong Kong officials are quick to hit back at Next Digital, accusing them of “smearing the Hong Kong NSL.” They also defend their arrests of over 100 Hong Kongers, saying the police arrested those “based on evidence strictly according to the law.”
Next Digital Media was a major proponent of the inherent dignity that the rule of law promotes, protected and sustained by human rights which stem from natural law and democratic ideals. Former Next Digital directors believethat as a result of liquidation, “no other rights are safe” in Hong Kong.
The media company is hopeful that some of its legacy will live on, with a firm operating in Taiwan that still publishes an online edition, under new owners. Still, Next Digital’s shutdown signals a dark new day for Hong Kong, as the CCP continues to restrict free speech.