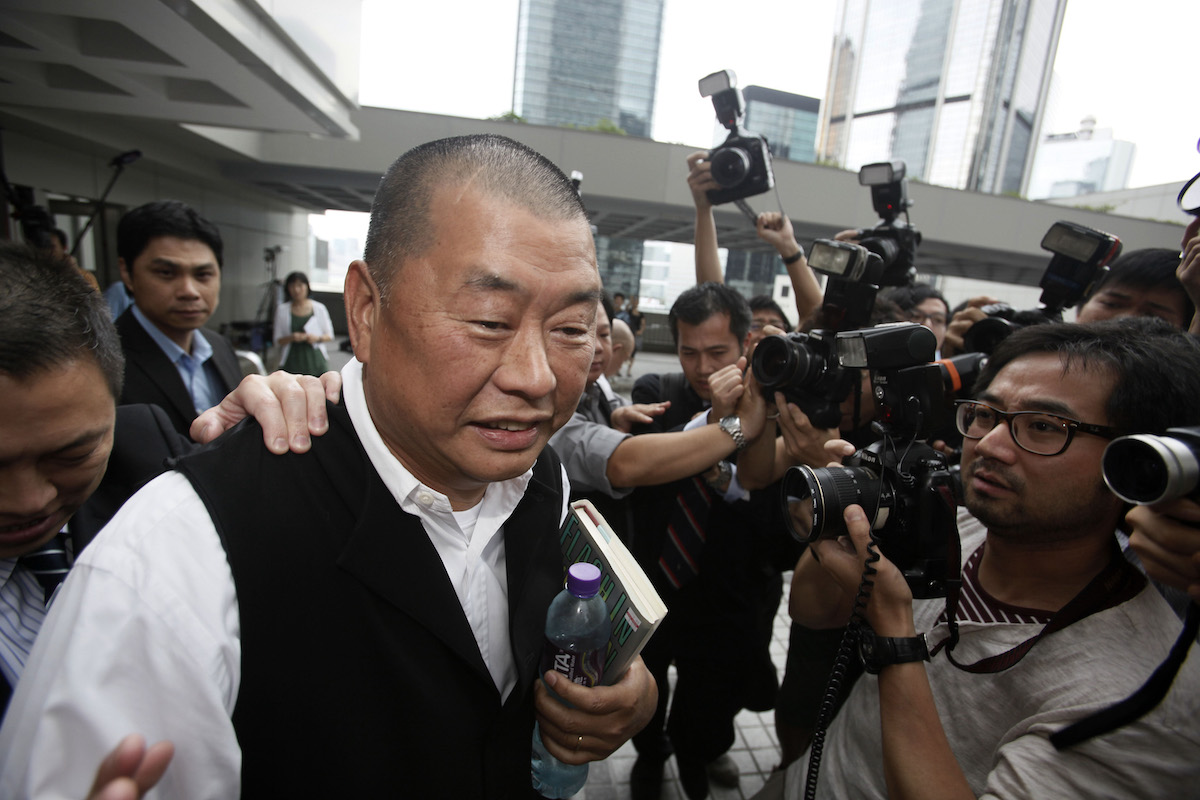 Lai Chee-Ying, also known as “Jimmy Lai,” is a successful Hong Kong entrepreneur, media mogul, and democratic activist who fled, young and penniless, to Hong Kong from mainland China. Lai eventually founded Apple Daily, one of the most well-read newspapers in Hong Kong.

Lai is best known for his pro-democracy activism, and has come under fire from the Chinese Communist Party, or CCP, for challenging its overreach in Hong Kong.

Lai was sentenced in April to 14 months in prison for his role in pro-democracy protests. Now, CCP leadership are doing everything in their power to eradicate Lai’s name and memory as they continue to snuff out threats to the CCP’s absolute power.

As a young man, Lai worked as a porter at the Shanghai railway station. He was given a piece of chocolate by a traveler. This simple act of charity changed Lai’s life. The chocolate was like nothing he had experienced before; the moment he consumed it, he knew he had to get some for himself. So he asked the traveler where he got this delicacy from, to which the traveler responded: “Hong Kong.” Determined to find a way there, Lai asked his impoverished parents to send him there.

At the age of 12, Jimmy snuck out of mainland China in the bottom of a fishing boat. Upon arrival, Jimmy started working in a knitwear factory.

Lai rose through the ranks to the position of factory manager, all while studying English. In 1975, he made his entrepreneurial debut by purchasing a bankrupt garment factory.

Lai’s entrepreneurialism, paired with his curiosity and work ethic, led him to learn more about free-market, classical liberalism from economists such as Friedrich Hayek and Milton Friedman. These thinkers inspired Lai’s love of liberty. This free-market education was the catalyst in Lai’s fight for freedom.

In 1981, Lai opened Hong Kong’s first fashion brand, “Giordano,” then successfully expanded his business to mainland China and other parts of Asia. It was with Giordano that Lai first began to express his democratic advocacy through business ventures, even in the face of government opposition and censorship. During the Tiananmen Square Massacre of 1989, the CCP and accompanying troops opened fire at pro-democracy student protests. Lai created and distributed Giordano T-shirts with catchy slogans that opposed the anti-democracy communist leadership. This courageous act prompted the totalitarian regime to forcibly close Giordano stores. In 1996, the business was sold entirely. But Lai wasn’t done yet.

As the Cold War ended and the Soviet Union fell, society seemed to have reached a consensus on the perils of Communism. It was in this era of hope and new beginnings that Lai founded the largest media company in Hong Kong, Next Digital (originally identified as Next Magazine). From this parent company, Lai launched Apple Daily, a globally recognized pro-democracy news service. The newspaper was named after the forbidden fruit, because, as Lai explains, “If Eve hadn’t bitten the forbidden fruit, there would be no sin, no right and wrong, and of course – no news.”

Commitment to faith and family

As committed as Lai is to a democratic society, he is even more committed to his faith in God. He was introduced to Catholicism by his wife, Teresa, a longtime and devout Catholic. Curious to learn more, Lai continued to go to mass and witnessed the homilies of Cardinal Joseph Zen. Lai converted to Catholicism in 1997, the same year that Hong Kong returned from British to Chinese rule. From then on, Lai relied deeply on his faith to remain resolute and hopeful under emerging Communist rule.

In 2014, the Standing Committee of National People’s Congress (NPCSC) issued a decision to propose reform to Hong Kong’s electoral process. Beijing officials promised universal suffrage to its citizens, but in actuality, the rule forced voters only to choose from a list of pre-approved candidates during elections. Most saw this decision as highly restrictive, and protests soon broke out. Lai was a frequent and prominent participant in these protests, which often included peaceful prayer and singing. During the demonstrations, the protestors quickly blocked the main east and west boulevards leading into the city. Authorities used tear gas to control the protesters, which only increased their fervor. Lai was physically attacked by two men, received countless threatening messages, and violent props such as machetes were left in his driveway. He was even rammed by a car and endured fire bombings at his home several times. Nevertheless, he continued to promote freedom and democracy in Hong Kong.

Lai has commented notably on communist government tactics, saying, “If they can induce fear in you, that’s the cheapest way to control you and the most effective way and they know it. The only way to defeat the way of intimidation is to face up to fear and don’t let it frighten you.”

Lai was arrested on Feb. 28, 2020. Hong Kong police took into custody three other veteran pro-democracy figures for taking part in the 2019 unauthorized pro-democracy protests. These protests were prompted by the Chinese government’s cancelation of the Aug. 31 Civil Human Rights Front march, a march that attracted up to 2 million attendees. The three other men were arrested on suspicion of illegal assembly; Lai and one of the three were released on bail the following Friday. The Hong Kong government was determined to silence influential pro-democracy voices and make examples out of them to instill fear in the rest of the citizenry.

On July 1, 2020, the CCP put into effect a National Security Law, or NSL. The NSL criminalizes behavior that endangers national security or is seen as damaging to China. Since its implementation, over 100 pro-democracy activists have been charged under its authority. Lai is one of them.

On Aug. 10, 2020, Lai was arrested again, this time on charges of colluding with foreign forces. That same morning, approximately 200 Hong Kong authorities raided the offices of Apple Daily, investigating and seizing dozens of boxes filled with Apple Daily materials. This made Apple Daily and Lai incredibly popular. The outlet reported it printed five times the usual number of newspapers the day after Lai’s arrest. The front page was an image of Jimmy Lai in handcuffs with the headline “Apple Daily must go on.” In June 2021, the Hong Kong government froze HK$18 million in Apple Daily’s assets, equivalent to $2.3 million USD. Apple Daily was forced to shut down its operations and printed its last edition on June 24, 2021.

In May 2021, Lai was sentenced to 14 months and was locked away in a Hong Kong prison. Still, more people continue to learn of his sacrifice and commitment to pro-democracy ideals, and countless people across the globe have been inspired by his selflessness and commitment to a higher cause: faith and freedom.

Jimmy Lai’s fight continues, and as arrests and convictions of Hong Kongers on charges under NSLs make newspaper headlines, the general public is reminded of the ongoing fight of pro-democracy advocates in Communist China. It is a fight Jimmy undertook when he snuck out of China in the bottom of a fishing boat as a young boy, and it is a fight he, and other courageous activists, continue to undertake for the reemergence of freedom and democracy in Hong Kong.