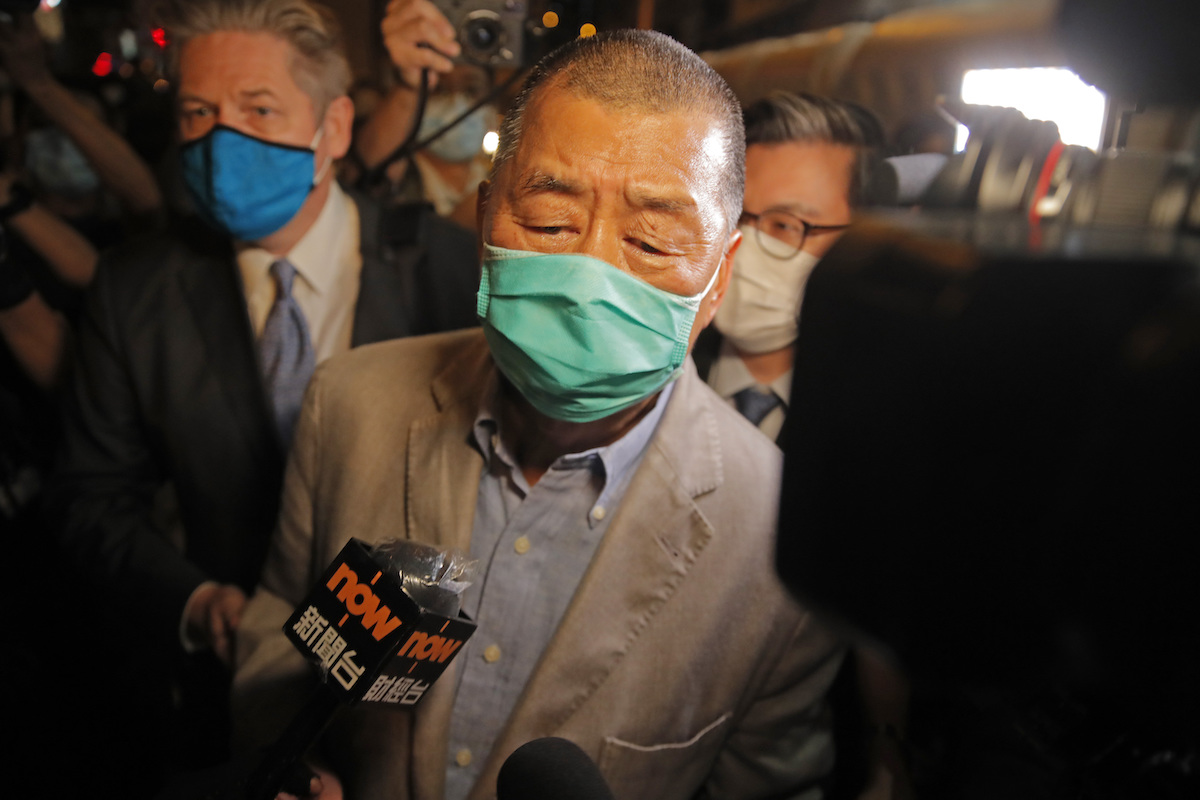 Hong Kong media mogul and fierce human rights advocate Jimmy Lai and the staff of the now-liquidated pro-democracy newspaper Apple Daily were awarded the Golden Pen of Freedom, the World Association of News Publishers’ annual press freedom award.
Although imprisoned, longtime Acton friend Lai continues to receive recognition and accolades for his outspoken support of democratic movements in Hong Kong, which are aimed at countering Beijing-inspired crackdowns on basic freedoms.

The award “recognizes outstanding action, in writing or deed, of an individual, a group or an institution in the cause of press freedom,” according to the association’s website.
Presented virtually, the award was accepted by Sebastien Lai, Jimmy’s son.
“Journalism is at the forefront of history,” Sebastien said. “It records the now and informs the future.”
Jimmy Lai has gone head to head with the city’s ever-restrictive National Security Law (NSL) on multiple occasions. Passed in June 2020, the law was the justification for the raid on Apple Daily’s headquarters by city police. The newspaper’s assets were frozen and its documents and records seized, forcing it to close a week later.
At the time of the Apple Daily raid, Lai had already been in prison for more than seven months. Currently, he remains behind bars on seven NSL-related charges, including unauthorized assembly for participation in a Tiananmen Square vigil. Seven other senior employees of Apple Daily and its parent company, Next Digital, both of which were launched by Lai, are serving prison time. Lai and his associates are set to stand trial on Dec. 28. Each could receive a sentence of up to life in prison.
The Beijing-imposed NSL suffocates any voice the Hong Kong government deems subversive, limiting citizens’ freedoms of speech, assembly, and access to the press.
“With a crackdown against journalism, there will be less and less people shining light in these dark corners,” Sebastien added in accepting the Golden Pen of Freedom award for his father.
The award was announced by the president of the World Editors Forum, Warren Fernandez, who said “the jailing of a publisher, the arrest of an editor-in-chief and his senior colleagues, the shuttering of a newsroom and the closure of a media title—the 2021 Golden Pen award recognizes and reflects on all of these.”
“Lai and his newspaper staff are the deserved winners of this year’s Golden Pen of Freedom Award,” the association added in their announcement, “for their courage to report the truth amidst opposition.”
According to the  World Association of News Publishers, this past April Apple Daily received and published a letter sent to them by Lai from his prison cell. It read: “Freedom of speech is a dangerous job. Please be careful not to take risks, your own safety is very important.”
In that same letter, Lai reminded his staff that “a journalist’s responsibility is to uphold justice. The era is falling apart before us, and it’s time to stand tall.”
Lai has fought unceasingly for democracy in Hong Kong, aiming to revitalize not only its economy but also its human rights. The Acton Institute is set to release an in-depth documentary, The Hong Konger, in early 2022, detailing Lai’s life as a defender of civil rights, free markets, and human dignity amid great opposition.