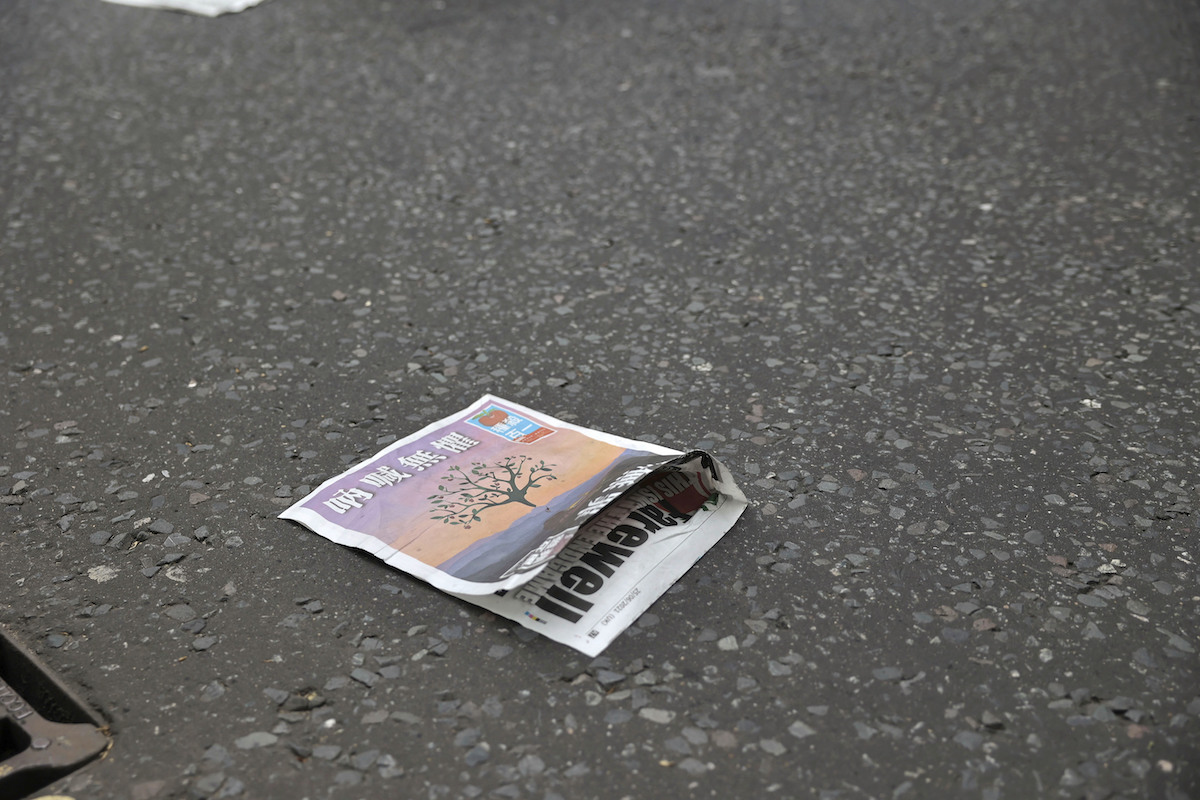 Reporters Without Borders (RSF) released this year’s World Press Freedom Index, ranking countries based on press freedom, from the most to the least press. In 2002, for example, Hong Kong was ranked 18th. This year, it fell to 80th out of 180 countries, while China landed at #177, only two spots ahead of North Korea.
RSF, a Paris-based nonprofit organization, promotes “the right to access of information” globally, according to its website.
“Journalism is the best vaccine against disinformation,” RSF secretary-general Christophe Deloire said in a statement. “Unfortunately, its production and distribution are too often blocked by political, economic, technological and, sometimes, even cultural factors.”

The Chinese government’s lackluster promotion of press freedom is evident in actions taken against its journalists and individual reporters. Independent journalists have been arrested for reporting via social media, as in the case of Zhang Zhan, who traveled to Wuhan last February to research and cover the COVID-19 pandemic on her smartphone. In May she was detained by Chinese authorities and in December sentenced to four years in prison on a catchall charge of “picking quarrels and provoking trouble,” according to the South China Morning Post.
China, “which continues to take Internet censorship, surveillance and propaganda to unprecedented levels, is still firmly anchored among the Index’s worst countries,” RSF said.
The Central Propaganda Department, a Chinese governmental organization, censors content to ensure that all Chinese publishers, including journalists, do not print anything that conflicts with the Communist Party’s agenda. There are eight other agencies, each sanctioned by the Chinese government, responsible for censoring different areas of Chinese society, including TV, radio, software, and general public information.
Not only is China itself on a trajectory of absolute totalitarianism, but it has bullied Hong Kong’s government into implementing repressive tactics against its citizenry.
Hong Kong has a long history of straddling the line between autonomy and dependence. In a city that used to be a beacon for both economic prosperity and civil rights, that beacon has dimmed because of its Beijing-imposed National Security Law (NSL), which has inhibited if not altogether squelched free speech, press, and access to information.
According to an article published by The Atlantic, Hong Kong has a touch-and-go history with democracy: “When the British handed Hong Kong back to China in 1997, the city was left with a strong court system, a tradition of free speech, and leaders educated in an open society with international connections.”
An argument could be made that Hong Kong’s decline began on July 1, 1997, or “Handover Day,” when the city’s sovereignty was peacefully handed over from the United Kingdom, which ruled over Hong Kong for a century and a half, to the People’s Republic of China—namely, Beijing. The two countries signed a document called the Sino-British Joint Declaration, ensuring that Hong Kong maintained a high degree of autonomy for the next 50 years.
From that point forward, Hong Kong was to operate under a “One Country, Two Systems” rule, existing as one of China’s special administrative regions, without losing its autonomy.
Since then, however, China has overstepped its boundaries, with recent attempts to control Hong Kong’s public media, private social media, and journalists themselves. Censorship and the cancelation of artwork, TV shows, books, and even citizens have occurred all too often since the passing of the NSL.
The law has turned Hong Kong into a virtual carbon copy of Chinese society, enforcing the same type of strict business regulations, in which mere communication with other countries qualifies as “collusion,” carrying with it criminal charges and prison time. Hong Kong has also restricted access to information and media, and journalists and social activists have been specifically targeted, as in the case of one of the city’s most prominent entrepreneurs, Jimmy Lai.
Lai was founder of the now-defunct pro-democracy Apple Daily, Hong Kong’s most popular anti-Chinese government newspaper, as well as its parent company, Next Digital. Apple Daily launched in 1995, just two years before Handover Day, writing editorials and reports in opposition to Chinese totalitarianism and its effect on Hong Kong’s autonomy.
This past June, Apple Daily’s headquarters were raided by an estimated 500 Hong Kong officials, in which assets were frozen and documents seized, forcing the closure of the newspaper the next week. In September, a government-hired private investigator raided the headquarters of Next Digital. The raid forced the company to withdraw business from Hong Kong and take steps to close down, saying the government crackdown left the company with “no way to operate.”
Under the NSL’s radar for decades, Lai was arrested on Aug. 10, 2020, on charges of unauthorized assembly in the 2019 pro-democracy protests. He has already served some of his prison sentence, but in Hong Kong’s latest censorship efforts was convicted on Dec. 9 along with two other prominent social activists for their involvement in a vigil organized to commemorate the Tiananmen Square Massacre.
More details on Lai and his extraordinary lifelong struggle against state control is showcased in the Acton Institute’s documentary The Hong Konger, set to be released in early 2022.
With China’s press freedom ranked at #177 out of 180 countries measured, close dependence on Chinese-style legislation means that Hong Kong is marching down a path much like China’s, one marked by utter fear of an absolutist state, an erasure of human rights, and the ruin of human flourishing.
It will take individuals like Lai and Zhan, steadfast in their democratic and moral convictions, to face down the government out to silence them and reverse the direction in which Hong Kong is currently headed.