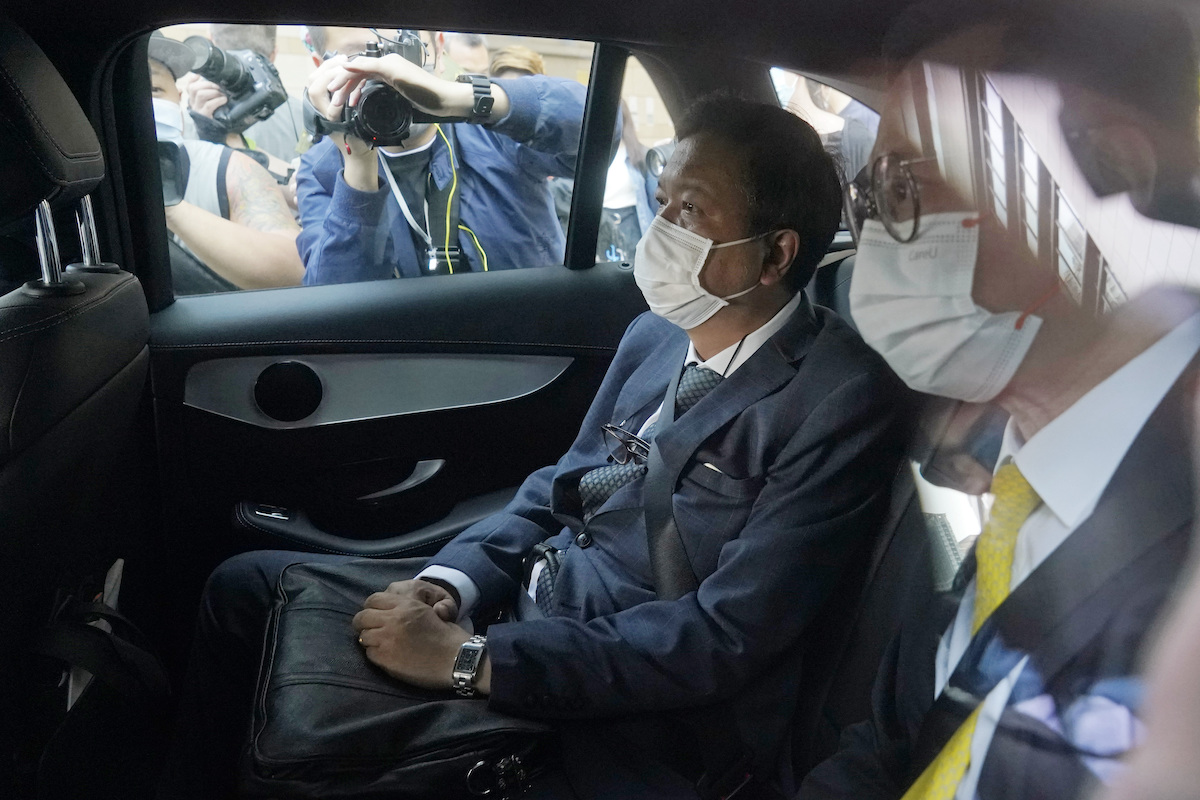 Two convicted Hong Kong activists Aug. 20 pinned jailed media tycoon Jimmy and his former top aide Mark Simon as the “masterminds” in a push for foreign countries to sanction China. The claim against Lai was revealed as part of a plea deal.

The two activists, Andy Li and legal assistant Chan Tsz-wah, pled guilty to conspiracy in colluding with foreign forces to endanger National Security under Hong Kong’s wide sweeping and restrictive National Security Law, or NSL. The two men agreed that Lai and Simon were behind a publicity campaign that encouraged U.S. sanctions against Hong Kong and Chinese officials.

The presiding Judge, Alex Lee, did not proceed with mitigation and adjourned the activist’s case until Jan. 3, 2022, because Lai has yet to stand trial on charges of collusion with foreign forces and unauthorized assembly. Lai’s trial is set for Oct. 12.

During the trial of activists Andy Li and Tsz-wah, lead prosecutor Anthony Chau read aloud a list of facts about the Lai and Simon’s plan to interact with foreign countries, including a description of Lai and Simon as “masterminds” of the conspiracy.

“I agree to the facts and I would like to say sorry,” Li told the court.

Lai’s lawyers have not commented on Thursday’s hearings but deny any collusion allegations against Lai. Simon is not currently in Hong Kong and says that it is “no secret” that he placed ads in global newspapers to raise awareness about what is happening in Hong Kong, but that Lai had nothing to do with these actions.

In a text sent by Simon, he denies the prosecutor’s descriptions of him and Lai: “But as for masterminds of anything? No, my vanity isn’t that great.”

In a recent Bloomberg article, journalist Chloe Lo comments on the immense pressure the NSL places on its defendants in a quasi-fair-trial, saying: “The law’s broad wording, long sentences and restrictions on jury trials put pressure on defendants to plead guilty before facing a panel of judges specially vetted by Lam.”

On top of defendants facing immense pressure under the NSL, there are also reasons to confess early on in trial. According to Sharon Fast, a law lecturer at the University of Hong Kong, “a guilty plea could help a defendant get their sentence reduced by one-third.” It is most beneficial to defendants to plead guilty early, in order to be granted concurrent rather than consecutive sentencing on account of their charges.

Andy Li and Tsz-wah entered among the first guilty pleas in Hong Kong under the NSL, which was enacted in June 2020. The Bejing-imposed law bans subversion, secession, terrorism, and colluding with foreign forces, and can carry up to a life sentence.

Li and Chan’s guilty pleas represent the fear that is embedded in the Chinese judicial system. The restrictive NSL, its daunting sentences, and the Chinese Communist Party’s state-appointed judges who preside, leave little room for truth and justice. The ever-restrictive NSL blurs the line between the truth and what is confessed out of fear.